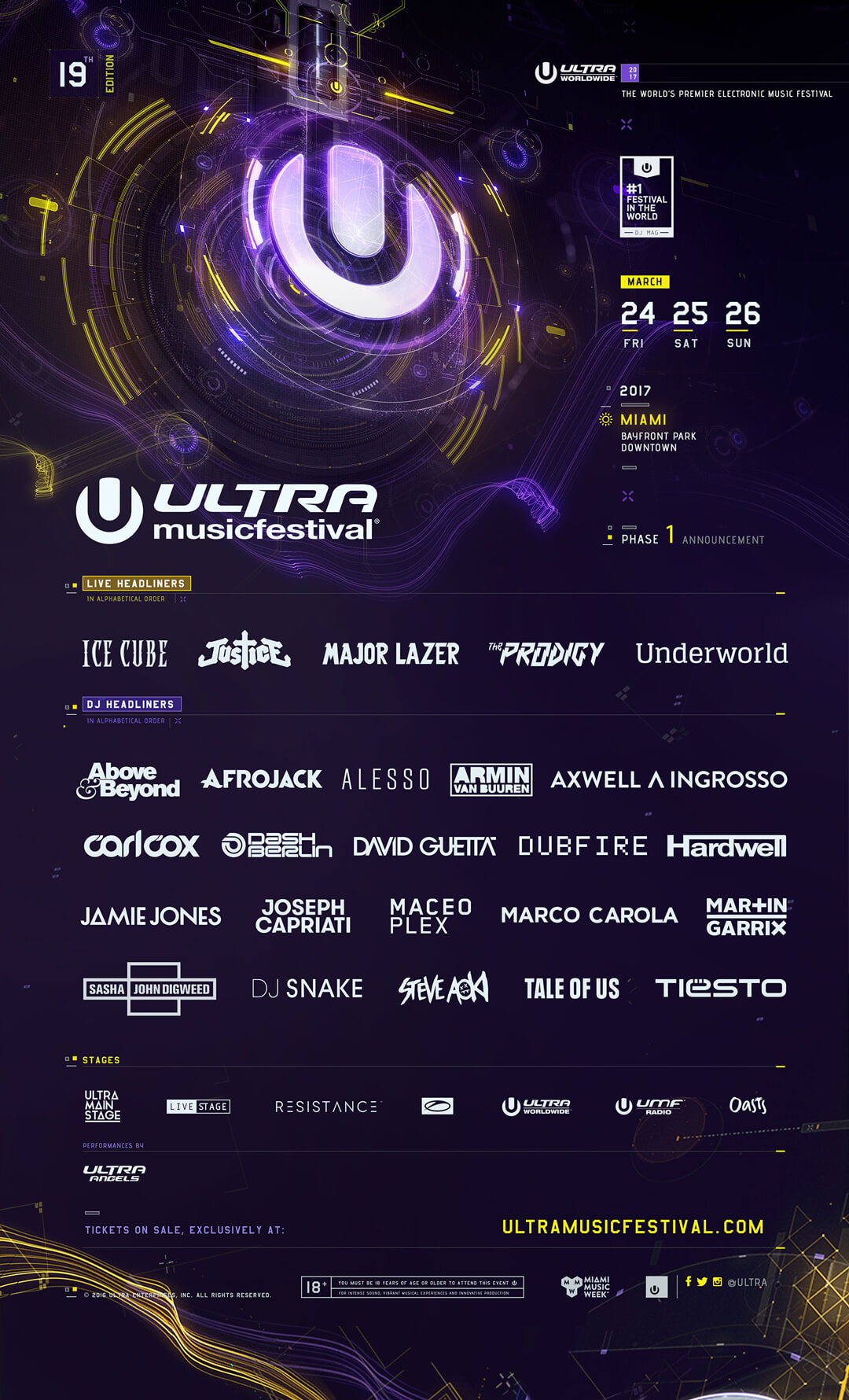 ULTRA MUSIC FESTIVAL, which takes place this March 24, 25 and 26, at the end of Miami Music Week 2017, has lifted the lid on Phase One of its lineup. With some spectacular additions across all areas of Bayfront Park, and some exciting new changes to the status quo format, ULTRA 2017 is looking rock solid.

ULTRA’s inimitable LIVE offering receives special attention for 2017, as it prepares to welcome some of the biggest names in Electronica, Hip-Hop and Pop to Downtown Miami. Headlining The World’s #1 Festival (DJ Mag) next March are a slew of chart-topping A-listers, including Ice Cube, Major Lazer, The Prodigy, Underworld and Justice, the latter of whom will be unveiling their brand new live show for the very first time in the U.S. As a brand that prides itself on providing its fans with a huge range of varying sounds and experiences, and with more acts of a similar stature due to be announced in the coming months, Ultra Music Festival has once again delivered an unmissable LIVE program.

The ULTRA Main Stage will welcome back the crème-de-la-crème of the DJ world. International DJ headliners and fan favorites Above & Beyond, Afrojack, Alesso, Armin van Buuren, Axwell^Ingrosso, Dash Berlin, David Guetta, Hardwell, Martin Garrix, DJ Snake, Steve Aoki and Tiësto will all grace the imposing structure, which will once again be bigger and better than ever before. The site of many performances that have shaped the history of electronic music, fans can expect all the pyrotechnic and sonic grandeur from previous editions and much more.

In a huge scoop for the RESISTANCE concept, the long-awaited return of Sasha & John Digweed will make its U.S. debut at Ultra Music Festival in March. This marks their first performance together in the U.S. since Ultra Music Festival 2010. Following this, the pair will embark on a world tour that will see them perform together at numerous other ULTRA WORLDWIDE / RESISTANCE events throughout 2017.

In an exciting change that looks to satisfy the ever-shifting tastes of festivalgoers, RESISTANCE will take over TWO stages at Bayfront Park in 2017. In addition to Arcadia Spectacular’s mesmerizing ‘SPIDER’ structure return, the Megastructure also becomes home to RESISTANCE, with Carl Cox named its Official Global Ambassador. Carl, who performed at his first Ultra Music Festival in 2001, has curated the lineup in the Megastructure across Friday and Saturday and will headline proceedings on both days. RESISTANCE headliners so far across both stages include Carl Cox, Dubfire, Jamie Jones, Joseph Capriati, Maceo Plex, Marco Carola, Sasha & John Digweed and Tale of Us, with many more to be unveiled over the coming weeks. For more information on all RESISTANCE events, visit resistancemusic.com.

With every genre across the electronic music space represented by the biggest and freshest acts on the planet, Ultra Music Festival 2017 is not to be missed.

Tickets for Ultra Music Festival 2017 are now on sale at ultramusicfestival.com.

The ULTRA brand in relation to live events was founded in 1997 in Miami by Executive Producer, President & CEO, Russell Faibisch, who began by producing electronic music events which led to the inaugural Ultra Music Festival® in 1999 on the sands of Miami Beach.

The internationally renowned festival, which has taken place every March since its inception, celebrated its eighteenth anniversary on March 18-20, 2016 by bringing over 165,000 music enthusiasts to the sold out waterfront event in the heart of the City of Miami. Ultra Music Festival®, recently voted the world’s #1 Festival by DJ Mag, returns to Bayfront Park for its nineteenth annual edition on March 24-26, 2017.

Choosing to follow a unique and creative vision and a wholly organic growth focused on its true love for music, artists and fans alike, the ULTRA and ULTRA Worldwide™ brands represent not only the world’s biggest and most successful remaining INDEPENDENT electronic music festival brand, but also the most international festival brand in the world. Event organizers continue to transport the unrivaled experience from the Miami flagship festival to an ever-growing number of destinations and Ultranauts all over the globe.

Over the past eighteen years, thousands of the world’s most iconic DJs, producers and live acts have mesmerized audiences with awe-inspiring sets at ULTRA festivals in ARGENTINA, BALI, BRASIL, CHILE, CROATIA, IBIZA, JAPAN, KOREA, SOUTH AFRICA and of course MIAMI, as well as ROAD TO ULTRA® events in BOLIVIA, CHILE, COLOMBIA, JAPAN, KOREA, MACAU, PARAGUAY, PERU, THE PHILIPPINES, PUERTO RICO, SINGAPORE, TAIWAN, THAILAND and the USA. Each new global edition has been founded on the same successful recipe that has been perfected over eighteen years in Miami, combining the most diverse electronic talent with the most technologically advanced, large-scale festival productions in the world.

The ULTRA brands have pioneered the live stream experience with ‘ULTRA LIVE’ (bringing the festival online to over 20 million unique viewers globally) and the audio broadcasting platform ‘UMF RADIO’ (syndicated to FM Radio in over 62 countries and reaching more than 22 million listeners weekly). Also UMF FILMS’ collaboration with FINAL KID has seen some of the most visually breathtaking festival aftermovies in the music space, including a feature-length documentary exploring the explosion of dance music, entitled CAN U FEEL IT™, which was premiered on the red carpet at the Klipsch Amphitheater in Miami in 2012 and was exhibited in over 500 theaters across the Unites States.

Stay informed on news and updates for Resistance Ibiza by subscribing below.